Draw Within Water is a collaborative experience designed to enable different levels of engagement. Participants can draw, add elements or explore. The installation is part of a research project into enable creative collaboration with mixed reality.

Draw With Water is driven by MirageXR a unity based mixed reality drawing app developed for the project by Sky Rolnick, Jump into the Light co-founder in collaboration with Martina Mrongovius. Integration to mobile augmented reality was supported by Alon Grinshpoon powered by EchoAR.

In this multiple-participant experience you can draw in virtual space and further populate the underwater scene from the library of sea creatures created by the artists. We launched the project in September, 2019 and it continues evolve with new creatures, animation and refinement of the interaction.
For many visitors to the HoloCenter, Draw Within Water is their first experience with immersive augmented reality.
Virtual experiences and holographic imaging have conceptual overlaps and are converging in the growing field of holographic media. There are nuances to each technology that enable distinct modes of visual experience. The HoloCenter encourages artists to explore a range of technologies and develop their own visual aesthetic.

There are no holograms in Draw Within Water but the illusion is enchanting. To create the ‘augmented reality’ experience we are using Lenovo Mirage headsets which have a visor that reflects a stereo — left and right eye — video feed. The reflected video ‘augments’ what you see in front of you. Augmented reality — AR — in its various manifestations is sometimes described as mixed reality or XR.

We created an underwater scene as a contribution to the growing awareness of our effect on the oceans and responsibility for our actions. This is a theme that runs through many of the public programs on Governors Island. We also chose an underwater scene because putting on the headset is analogous to donning a scuba driving or snorkeling mask to enable the experience of underwater environments. We chose to present this experience using augmented reality headsets so that participants could still see each other and their physical surroundings. The feeling of a collective experience between the participants is palpable.
To enable all ages to creatively engage we wanted a simple design. There is a single control panel in the scene where participants can select brushes, colors and creatures. It was important to us that everything could be done with a single controller as people felt more comfortable having a free hand and younger participants often use their spare hand to support the weight of the headset. To accommodate our youngest visitors we added a submarine with an augmented viewing periscope.

Although we wanted to develop an experience for augmented reality headsets the cost of multiple HoloLens or MagicLeaps (which are thousands of dollars each) was outside our budget. Sky Rolnick came up with the idea of attaching a Vive trackers onto a Lenovo Mirage headset and each one has a Google Pixel 2XL phone inside. Most of the technology that we bought was surplus or second hand. Jump Into the Light lent some equipment and Vive sent us a tracker when they were first released. The tracker from Vive sparked a whole range of ideas about creating with the movement of bodies through space.
The HoloCenter often has the wow meter on ‘high’, and this installation is no exception. Most people are comfortable going into the virtual scene, but describe the strange feeling of taking the headset off. After being surrounded by sea-creatures and drawings and navigating the space around them the room felt vacuous. It is was more empty than when they walked in. Draw Within Water is installed at the HoloCenter on Governors Island until October 27, 2019. Free and open to the public every weekend 11am-5pm — check the HoloCenter website for further installations

The research projects were made possible with funds from the NYSCA EMF in Partnership with Wave Farm: Media Arts Assistance Fund, with the support of Governor Andrew Cuomo and the New York State Legislature. Visit the NYS Media Arts Map to find more places that combine technology with creative practice. 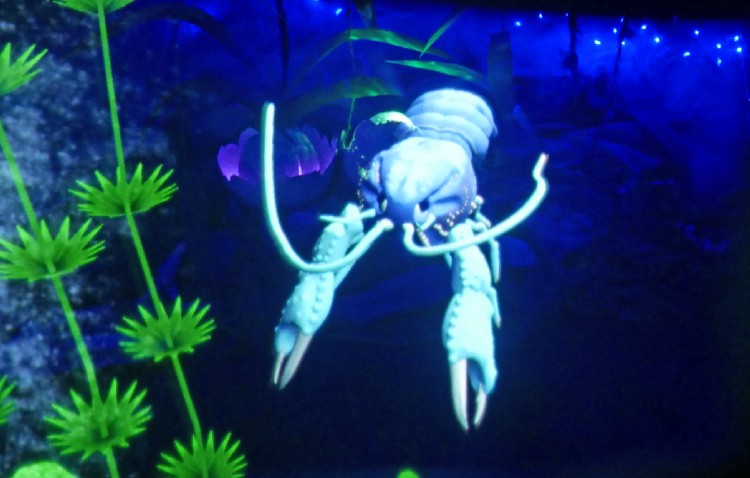 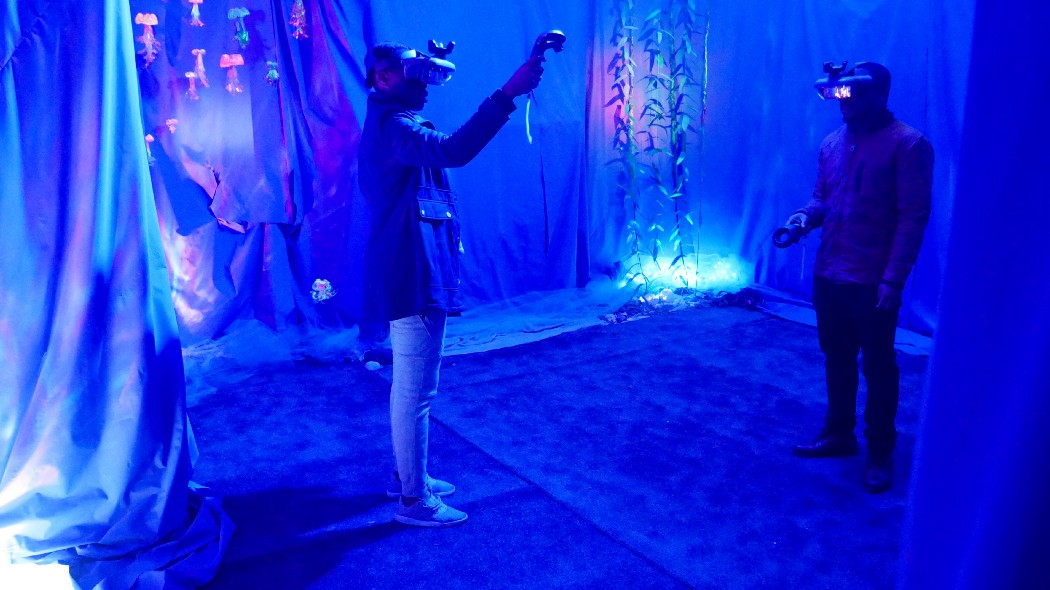 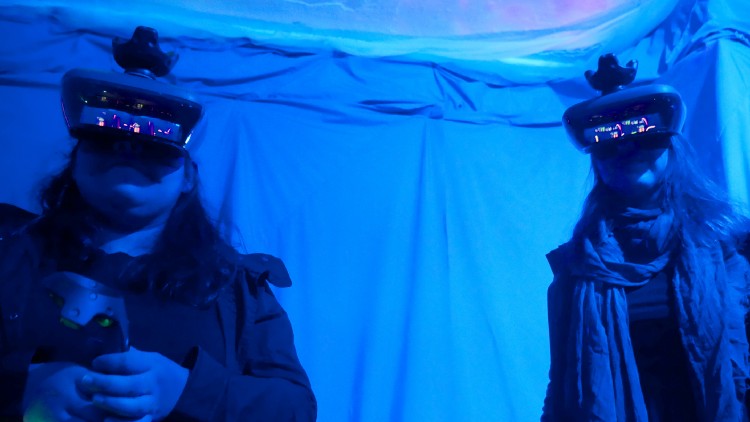 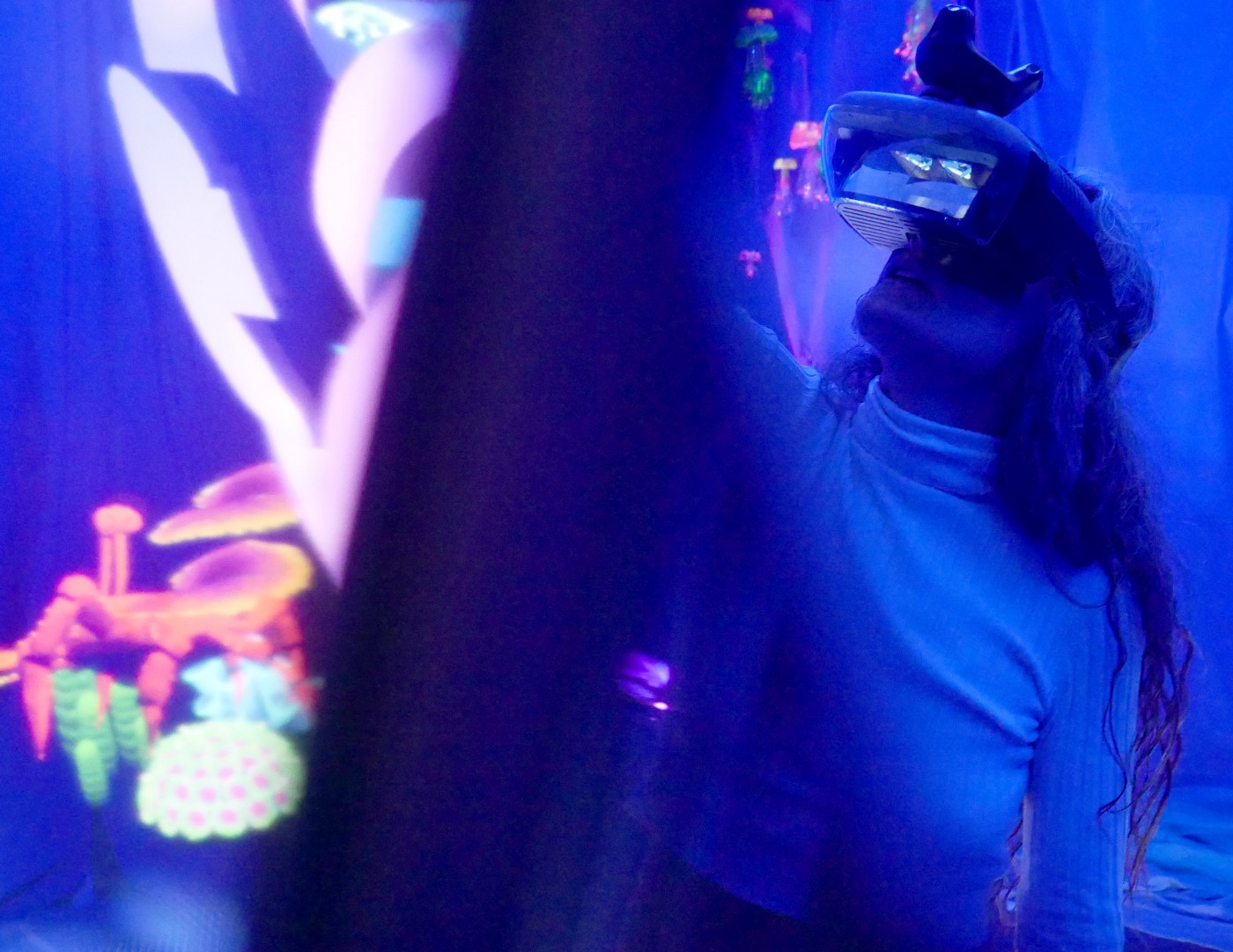